Thanks to Robin Sharp for this description and photos

When showing my brother visiting from Qld. we took him to the Mt Korong area where we were lucky to see a Southern Boobook Owl, a Tree Goanna and Bearded Dragon 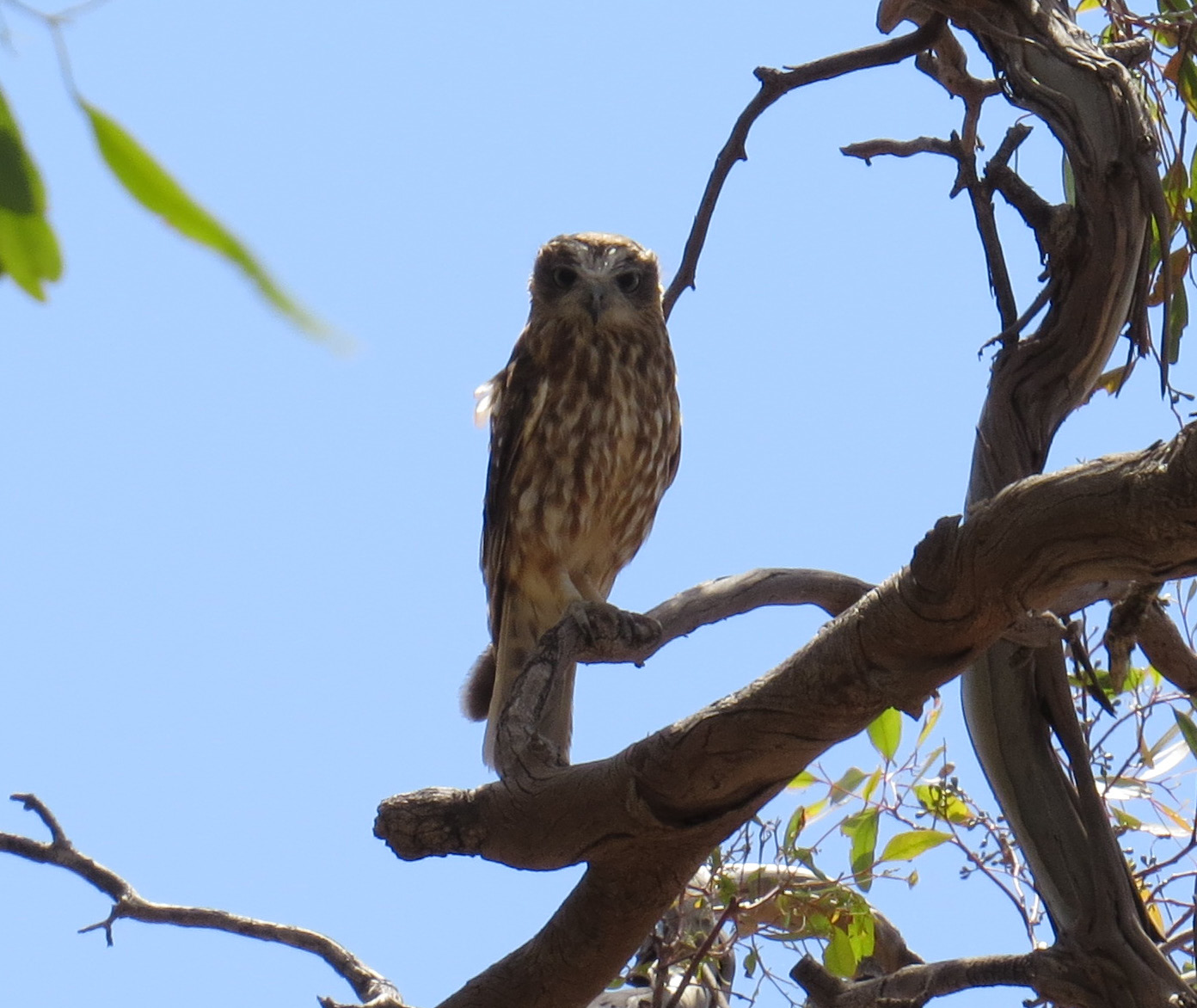 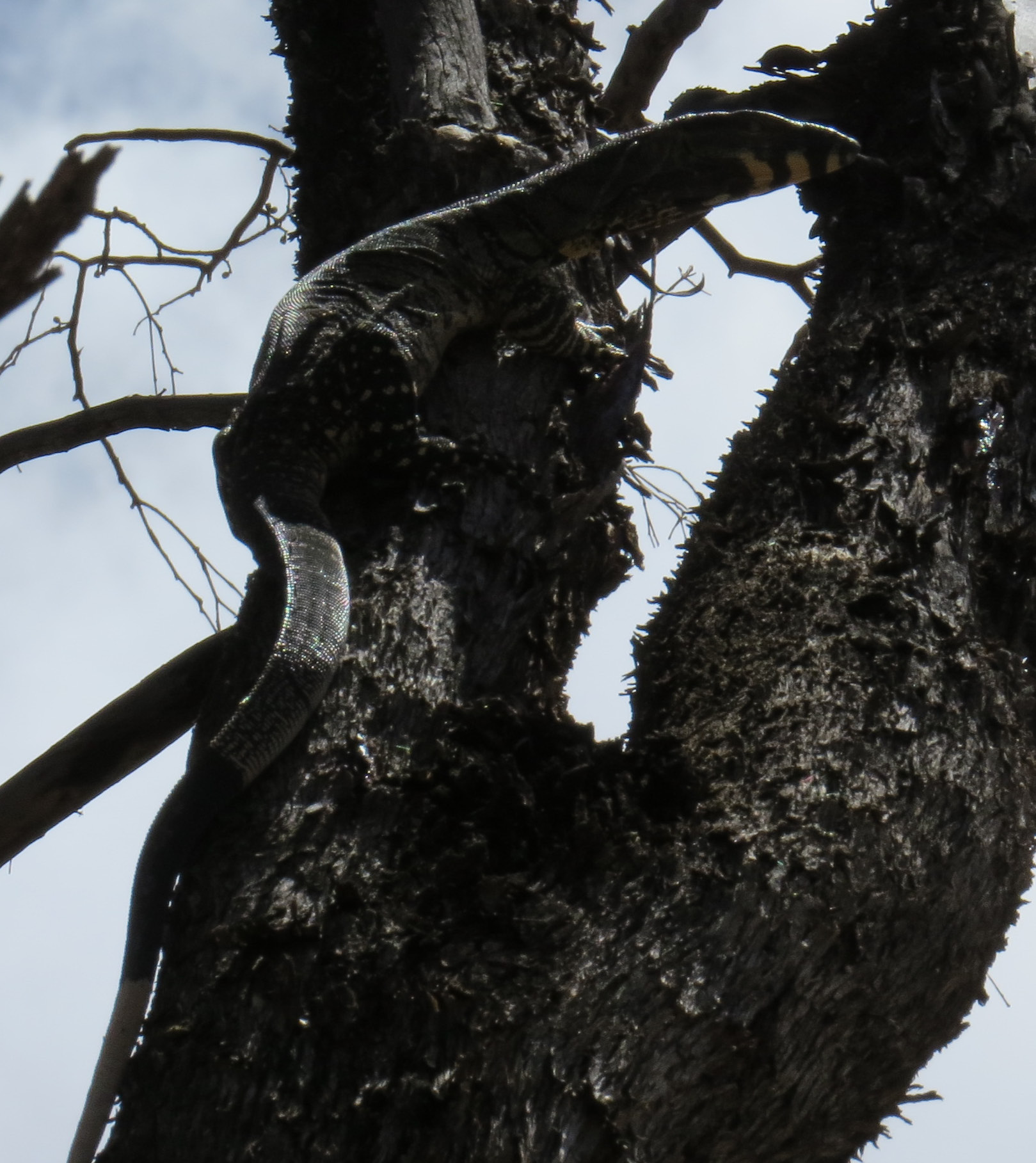 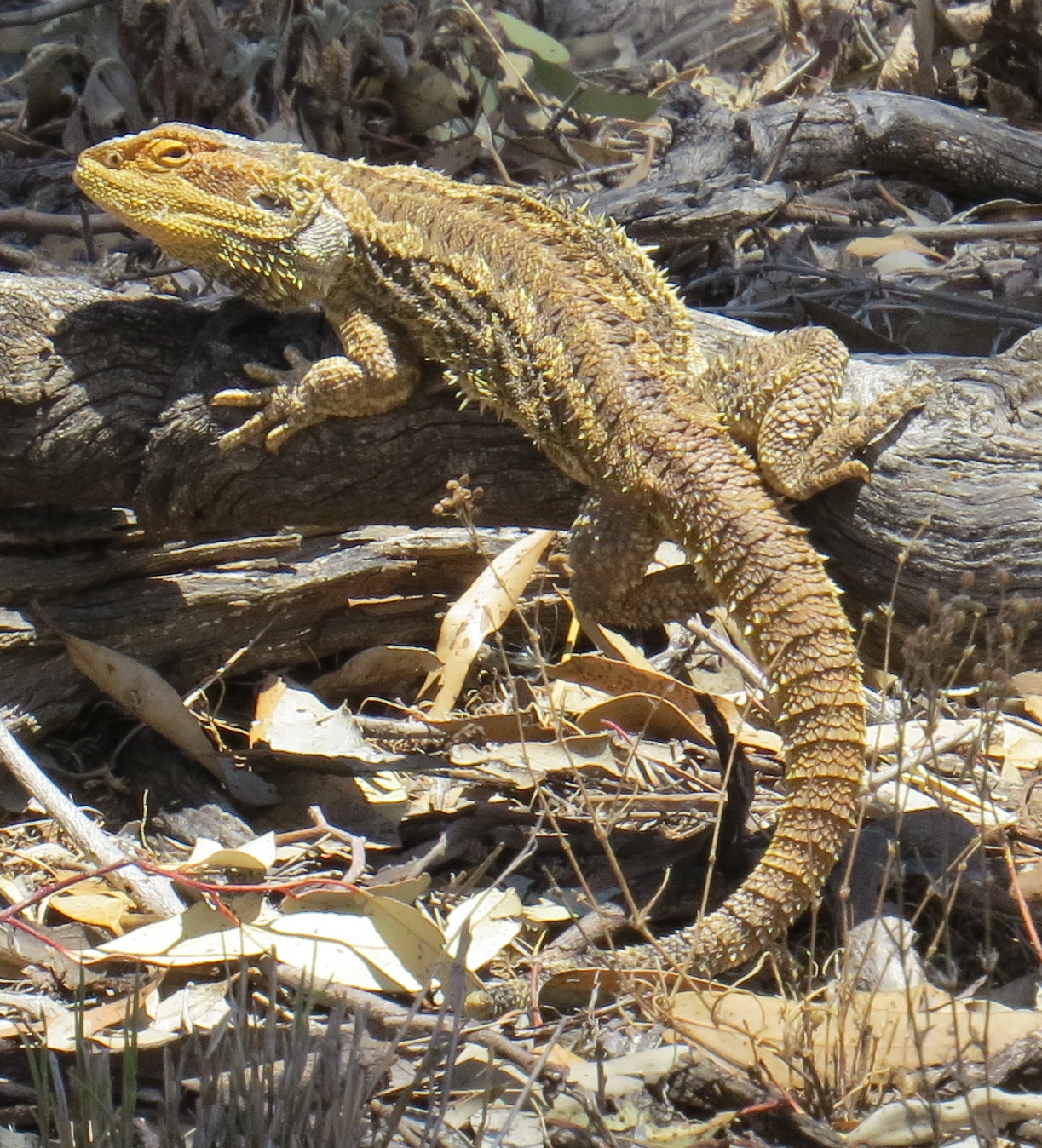 Join this exciting long tem project of the Mount Korong Eco-Watch members and landholders. Click on the link below for details and to watch the video

Many townspeople of Inglewood and Wedderburn have memories of days at lovely Mt Korong – climbing to the summit, having a picnic and even swimming in the old days.

In recent years over 1000 hectares of granite foothills beside Mt Korong has been direct-seeded with local trees and shrubs, to complement the bush of the Mount and improve the habitat for some of our threatened species, such as Hooded Robin, Painted Honeyeater and Powerful Owl. Extensive rabbit and weed control has also been carried out and is ongoing.

This regenerating country is known as Korong Ridge Conservation Estate, and the families who have bought blocks there are committed to restoring the biodiversity of the grassy woodlands and getting the bush ready to eventually be home to animals that were once found there, including Bettongs, Bandicoots, Curlews and Quolls.

Mt Korong Eco-watch is a grassroots, community group, made up of Korong Ridge families and other local people who want to enhance the health of the bush at Mt Korong and its surrounds. The group meets each month, plans ways to improve the bush and has working bees to remove weeds, undertake further revegetation and prevent erosion.

‘Rewilding’ is a concept that involves removing feral pest animals like foxes, cats and rabbits and creating a safer habitat for threatened native animals and plants. Rewilding helps restore the natural balance. 2016 will see the creation of a volunteer-run nursery at Korong Ridge, to grow understorey plants, to improve habitat and local biodiversity, but just as important will be the removal of pest species.

It is estimated that approximately 15 million feral cats kill about 75 million native animals every night across the whole of Australia.

Mt Korong Eco Watch has just entered a partnership with Victoria’s Department of Environment, Land, Water & Planning’s Threatened Species Protection Initiative.  DELWP have agreed to match funding, dollar to dollar (up to $25,000), for any money raised from a Crowd-Funding campaign launched last Tuesday. The group hopes to raise $12,000 to install a network of remotely operated, wireless trail cameras. These will be located across the conservation property’s 1000 hectares, to provide ongoing monitoring of both feral and native animal numbers and locations, and then create an action plan for the group to continue to remove pest species and protect our threatened species effectively.

How exciting it will be to one day hear the cry of the Curlew again and see some of our small nocturnal marsupials return to Mt Korong!

The Crowdfunding deadline is 15th December.

Click/Tap on the link below

Can you name these birds?

Thanks to Robin Sharp and Joy Hick for these 3 species of small birds which were photographed in and around Korong Vale. Can you identify the scarlet robin, red-capped robin and mistletoe bird? 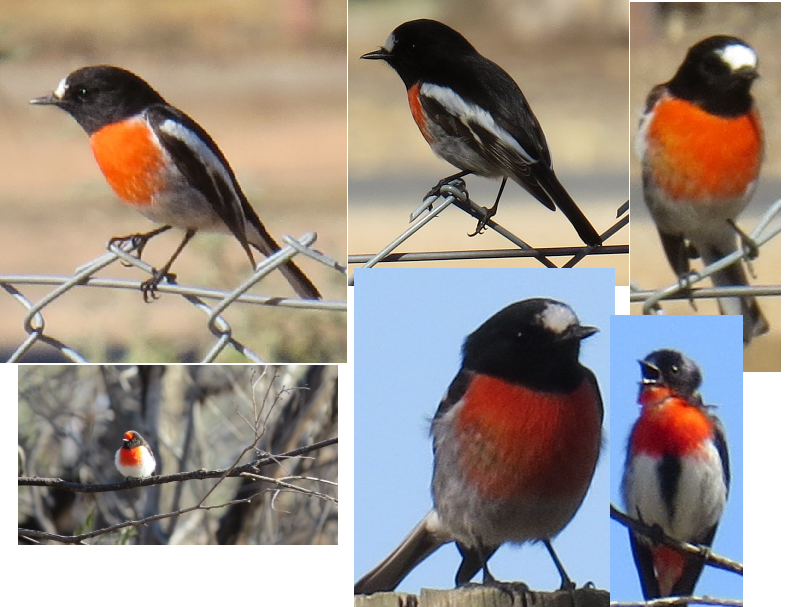 Thanks to Robyn Sharp for the following photos and description.

We were alerted by a couple Council chaps that an owl was being attacked by Ravens & Maggie's.

We tried to chase off the attackers and catch the Owl but had a lot of difficulty they were going to kill it.

The Owl managed to go into the paddock out back and the council boys caught it, and took it to the wild life person, Denise, and she took it home to recover.

Phoned her last night and she will check it again this morning to see if any injuries, then she will hold it for a couple days then release it. 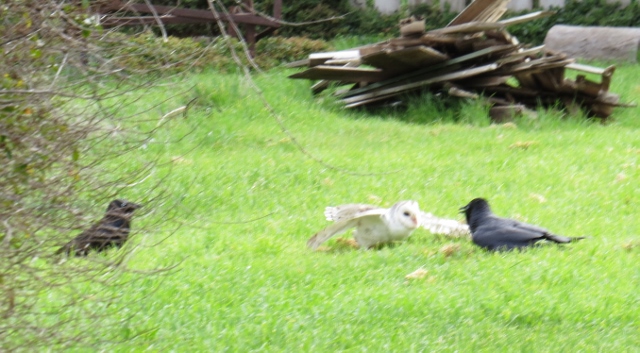 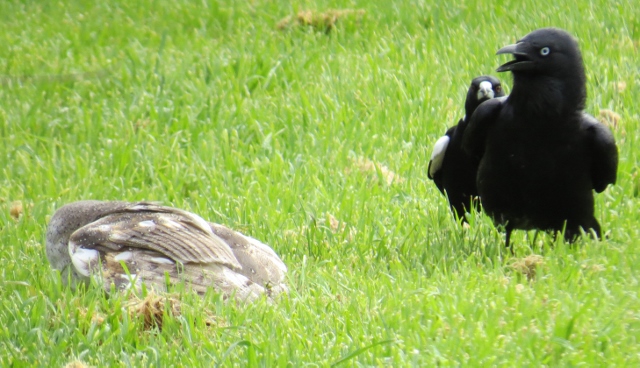 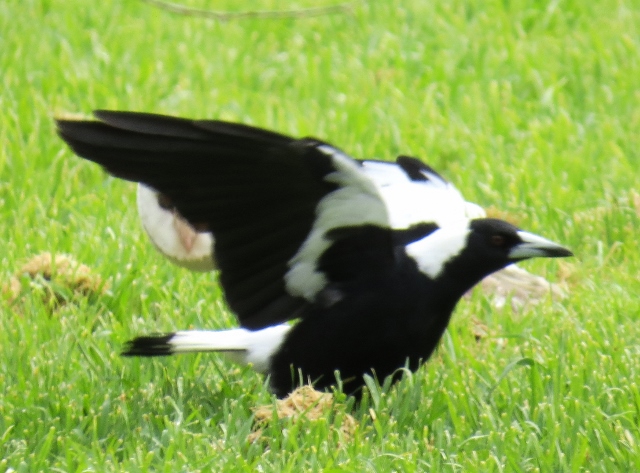 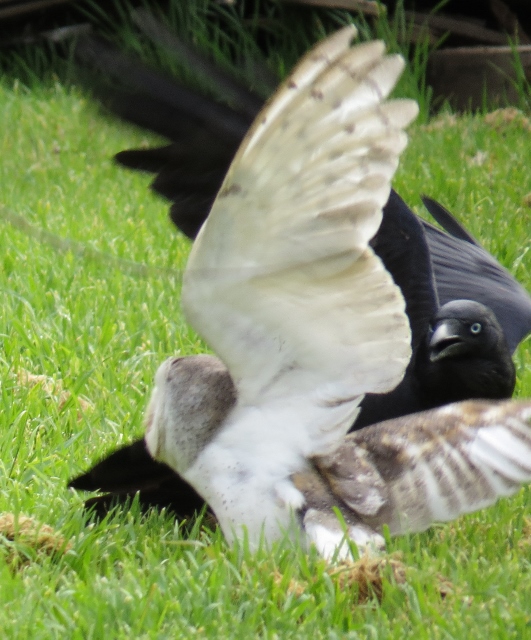 It is true that owls need to find somewhere secluded to roost during daylight as most owl species will be attacked by other birds if they are found on their daylight roost. This Barn Owl is an Australian bird but it also occurs on every continent except Antarctica.

What do you know about Gazania?

Gazania plants are a common sight around Central Victoria, including in and around the Wedderburn district. While many people appreciate it for the attractive daisy-like bronze, yellow and orange flowers that appear in Spring and Summer, Gazania is a serious environmental weed and we need your help to stop it spreading in our town.

Native to South Africa, Gazania was originally brought to Australia as an ornamental plant. However, it soon escaped from private gardens to infest roadsides and native bushland where it suppresses and replaces native plants. According to the CSIRO Jumping the Garden Fence report, it is among the ten most serious invasive plants still being sold in Victorian nurseries.

Gazania is extremely hardy, withstanding coastal conditions and sandy soils. It produces abundant seeds that are transported by wind and water, and also spreads vegetatively via continuously growing underground stems known as rhizomes. Seeds and plant fragments of Gazania are often spread in garden waste, and through roadside disturbance such as grading and mowing.

Small infestations can be removed by hand or by spraying a registered systemic herbicide into the centre of the leafy rosette. A broadleaf-selective herbicide can be used where there is a risk to native grasses or lawn. When hand pulling Gazania, make sure that the roots are removed and flower heads are bagged. Clean mowers and other machinery after working in infested areas.

Native plants that are suitable replacements for Gazanias in the Wedderburn district include:

Thanks to Karly Learmonth for supplying this article

On September 19 & 20 we will again be holding our annual Wildflower Show. This year the event will be held at the Inglewood Eucalyptus Museum with the Saturday being a stand-alone day, but Sunday will be in conjunction with the Eucy Heritage Festival, which will include varying kid’s entertainment. The cost for both days will be $5 per adult with children free. Two bus tours will be conducted each day with Saturday having wildflower tours with the morning tour featuring a bird presenter and Sunday being wildflower tours with the morning tour featuring a butterfly presenter. Bookings are essential at least 15 minutes prior to departure. All of the details are on the Friends of Kooyoora website www.kooyoorafriends.org.au

Also don't forget to enter the photo competition. Entry forms and conditions of entry are on the website.

16 people met at Inglewood in fantastic weather for the joint group trip looking at differing aspects of the eucalyptus harvesting industry. Our first stop was the Bosisto’s blue mallee plantations in Glenalbyn, which were begun in 2012, with over 2.5 million trees now in the ground. Des Lamprell was our guide for the day and gave us a fantastic run down of how the trees planted in the plantation are ’super trees’ specially bred over 12 years to be high oil yielding. He then explained the harvesting technique used including some of the troubles they encounter, like the harvester sometimes pulling trees out as it goes.

Our next stop was the seed orchard, where each tree is numbered and when seed is collected and trees grown from it and planted in the plantation, a complete record is kept and the progeny of every single tree in that orchard can be located in the plantation of 2.5 million trees. If a tree is deemed unfit to produce ‘super trees’ it is simply removed from the orchard (i.e. cut down!)

Then it was on to the distillery, and the wonderful smell of eucy oil freshened up the air. Des showed us around the harvesting machine and the distillery. It was really interesting to learn how the whole distilling process now happens in the back of the trucks the leaves are harvested in to. It was also lovely to feel the warmth of the boiler, even though the weather was nice, you could just imagine it would be the place to work in the middle of winter. I’m not sure about summer though!

It was hard to leave the distillery, but we had to have lunch. A change of plan saw us drive a short distance through the bush to the Glenalbyn camping ground to enjoy our quick lunch surrounded by Kooyoora State Park.

We drove on to Wedderburn where we met up with Jeroen van Veen of the Wedderburn CMN. The group has a project running to return a decommissioned harvesting site back to more natural conditions. This includes removing some of the mallee regrowth and seeding the rows with understorey species. The main aim being to create more suitable habitat for local malleefowl, of which there are two active mounds nearby. Paul Foreman was asked to design the project with much of the work being carried out by the Conservation Volunteers Australia and Green Army teams. It is certainly a long-term project and it will be interesting to see the results.

This was our last stop and from here we travelled back to our homes after gathering so much information and a better understanding of how the eucalyptus harvesting industry works and how others are working to improve decommissioned sites back to natural conditions.

Weeks ago the female Golden Whistler paid us a visit but there was no sign of the male, until today, Monday 15th June 2015. As I was out side when he appeared I was only able to get one not so good shot.  After a short while, inside, sitting at the big window there he was again, he came right up to the window and posed, then as quick as he arrived he was gone. 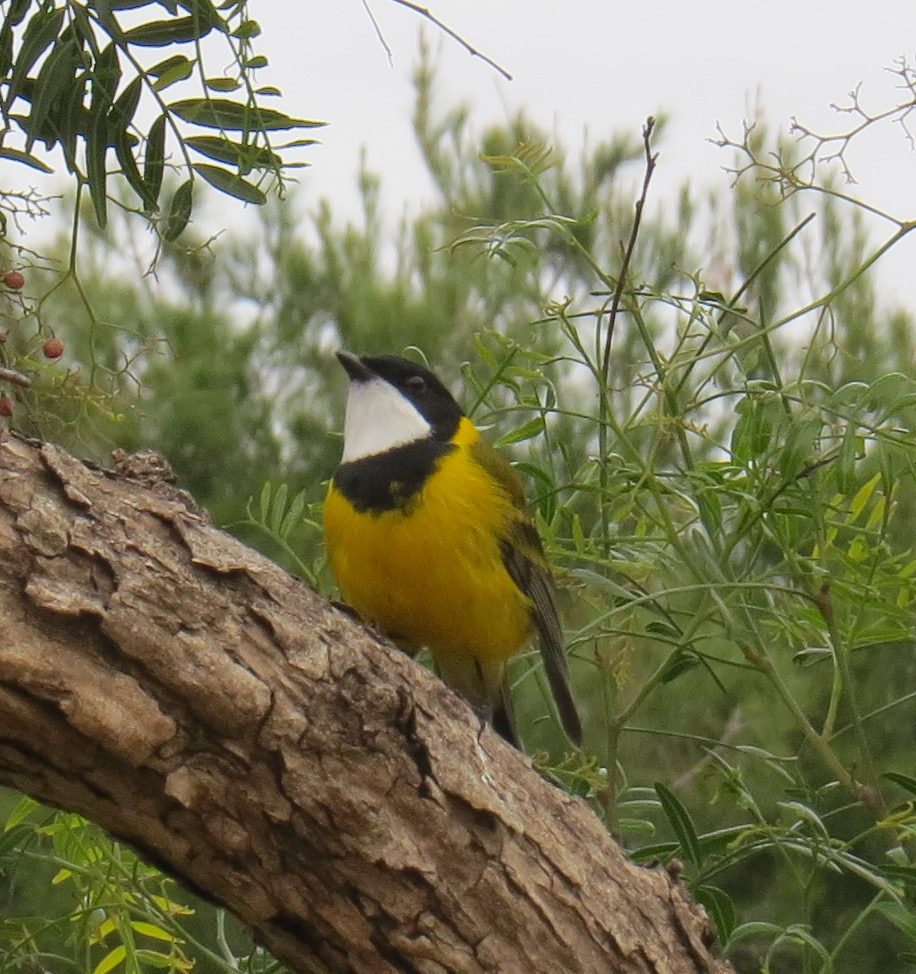 Thanks to Joy Hick for these photos along the barrel drain walking track in Wedderburn. Spiny cheeked honeyeater and a group of white browed babblers, enjoying the pickings of the town greenery prior to the recent welcome rain. 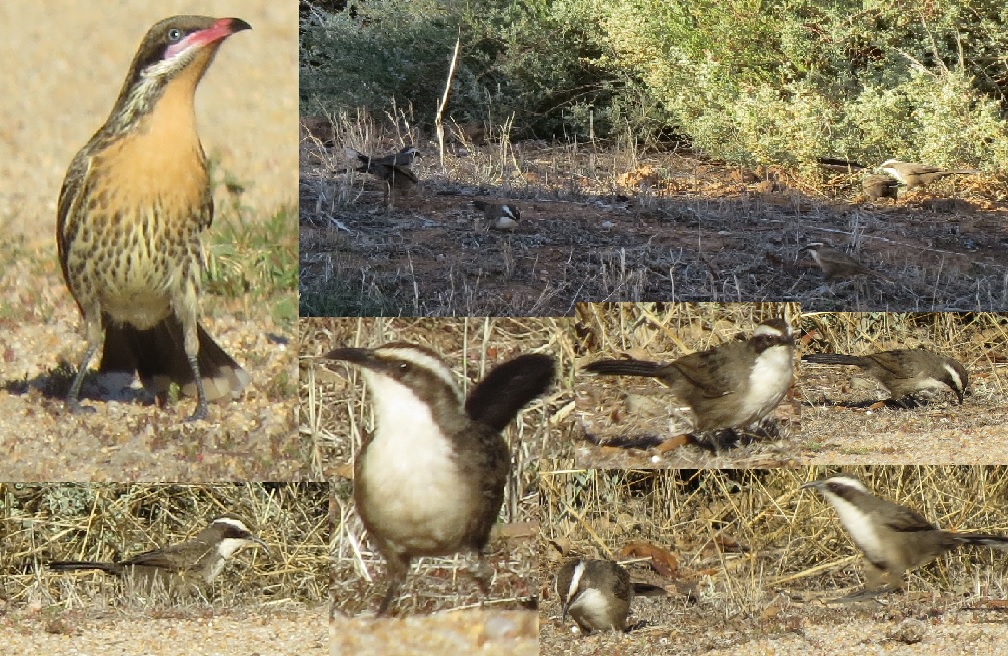